Tonchi’s story was last week, and this week will be dedicated to Koa!  Tonchi was only 18 months old when Koa was born.  We were certainly surprised by his pregnancy, but it was a fantastic surprise.  These two boys play well together have always shared a room and don’t know what to do with out the other one being around!  They share clothing and space and most of the time get along.  Of course they argue like any sibling does, but the love each other fiercely too!

All through the pregnancy the due date was February 24, but as the day approached and passed I didn’t feel at all like it was time for him to be born. I didn’t feel uncomfortable at all, no swelling in my hands or feet, I could still sleep through the night without having to get up to use the restroom, I hadn’t been having Braxton Hicks, I was measuring small, I hadn’t lost my mucus plug, and so much more. As I thought about all of this, I remembered that my cycles were 6 weeks long instead of the usual 4 weeks. I mentioned this to my midwives, Tierney Dovan and Peggy Franklin and they agreed that the date had probably been miscalculated. The date was changed to March 10!

My last prenatal appointment was on March 5 in the late morning. While I was there I mentioned the fact that my feet had started to swell a little and I couldn’t wear my wedding rings any more. I also noticed that I had lost my mucus plug. We were all in agreement that Koa’s arrival was certainly getting closer. They asked if I wanted to try a few things to get labor started and I agreed. Tierney stripped my membranes (it was a little uncomfortable, but didn’t hurt) and then I purchased some Cotton Root and Labor E. Brian was there with me and on the way home we purchased some castor oil and Rosemary essential oil. After we ate lunch I waited 2 hours before starting the regime! First I was to take the Cotton Root under my tongue and then 15 minutes later take the Labor E. I was to alternate each every 15 minutes for the next 2-4 hours. I also used the breast pump for 30 minutes each hour, and also rubbed castor oil with the Rosemary essential oil on my belly each hour as well. As I was doing all this I was having contraction ranging anywhere from 2-5 minutes apart, but they didn’t hurt very much and weren’t at all regular or consistent.

I continued and pressed on thinking it would work, but after 4 hours and soreness under my tough from the burning of the herbal supplements, I was ready for a break. It was about 8 pm and I was tired… Brian and I watched a movie, put Tonchi in bed and got ready to go to bed. I had been talking with Tierney and Peggy about it all. After stopping the supplements the contractions stopped completely. I slept through the whole night and didn’t have any more contractions. 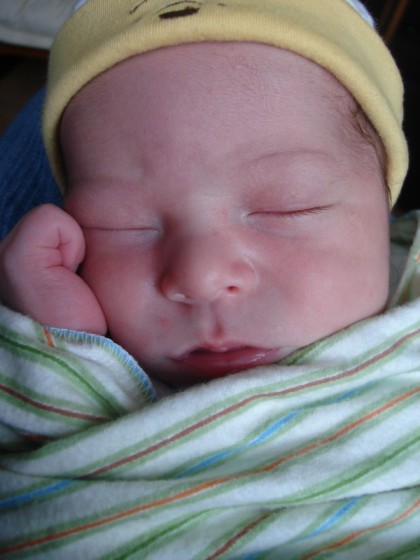 On March 6th I awoke feeling great… unfortunately! I was ready to have that baby! Contractions started up again on their own at about 9am. It still wasn’t consistent and they only felt like cramps, not contractions. Brian was home all day so we all went for a walk in the afternoon. Tonchi had a great time at the playground! I was hoping the walk would help to speed up the contractions, but in fact, we were gone for 1 hour and I had a grand total of 3 contractions. Obviously things weren’t working on my time frame!

Mom and Brenda had a program at church at 7pm, so they stopped by at about 6 to say hi and see Tonchi. We were eating dinner when they stopped. At this point my contractions were about 5 minutes apart, but still not at all painful. More like Braxton hicks with cramping. They left, and I asked them to call when they were leaving church to see how things were going. If it looked like things were changing then I was going to have them come back and pick up Tonchi for the night.

Tonchi, Brian and I laid on the bed upstairs and did some reading, worked on the computer and just laid around. At about 8:30 things started to pick up and I could tell this was it. Mom called around 9pm and they came back and picked up Tonchi. These contractions did hurt! And they were about 4-5 minutes apart. Brian called Tierney and Peggy and asked them to come on over! Things were finally starting to move along!

Tierney and Peggy arrived a little after 10pm and I was still able to converse before and after contractions. Brittany also arrived at about the same time. Brian was working on filling the birthing tub with warm water, but it never really did happen! He did get it filled, but it was only lukewarm, and not really as relaxing as it had been with Tonchi. Tyler and Michelle had been invited back for this birth as well, but Michelle was still in the UK and Tyler was out of town for a funeral. We were sorry not to have them and really missed them, but know they would have been there if it was at all possible!

At just before 11 I was ready to get in the pool, but Tierney and Peggy wanted to check me and check the baby before I got in. I was 5 cm! YEAH! Things really were moving! I got in the pool at about 11pm. By 11:40 I was hitting transition! Tierney checked me again and said I was 9.5cm and if I wanted to have the baby out of the water and in my bed I had better head upstairs.

I tried to labor on the floor leaning against the bed (I wanted to keep the mess out of the bed!) but I just couldn’t get comfortable and nothing seemed to work. Peggy had a hard time finding Koa’s heart rate and said I needed to try a different position. I got up on the bed and laid back on some pillows. After two contractions I wanted to start pushing. After the next two contractions Koa was born! At 11:59pm!

As his head came out Tierney said the cord was around his neck and it was too tight to remove. She asked me to give one last good push to get the rest of him out quickly. I did and the rest of him was born along with about a gallon of water! My water broke while I was in the pool, but there was still a lot of water above Koa before he was born. I felt terrible that Tierney’s leg got soaked!

It was an incredible birth! I’m so glad it was faster than Tonchi’s, but I feel like it was so much more intense. I remember Tonchi’s labor being hard, but this seemed a lot more painful. Dad is still working down in Georgia, so we didn’t get any pizza and sushi like last time! He promised it when he comes back to see Koa. I was quite bummed! At midnight I did have a PB&J with OJ! It tasted GREAT!

Brittany left around 2:10 and Peggy and Tierney left around 2:30. It felt so good to get in bed and go to sleep. What a great reward after half a nights work! I really did feel good. I didn’t have any tear or swelling which made recovery that much faster.

God RICHLY blessed us with a healthy little boy with 5 fingers and 5 toes, and all appendages in between. Towards the end of this pregnancy I had worried quite a bit that there was going to be something physically wrong with Koa. I had prayed about it a lot and God answered. He is perfect! Why is God so good to us? We are so undeserving and yet we have been so blessed.

Brian again was the perfect coach. I’m so glad he was there by my side during the whole thing. I really don’t think I could do it without him. He is so good at encouraging me and helping me look towards the end instead of only seeing the here and now. God has truly blessed me with a wonderful man and two wonderful sons!

Koa is now 4 and I can’t believe how fast time has flown by.  He is such a hard worker and is always ready to lend a hand for any task.  He LOVES rope and is constantly tying things up or around things or pulling himself into a tree.  He adores his Papa and wants to be just like him!  He is stubborn, opinionated, loyal, independent, loving and tenderhearted.   I just love this little boy! 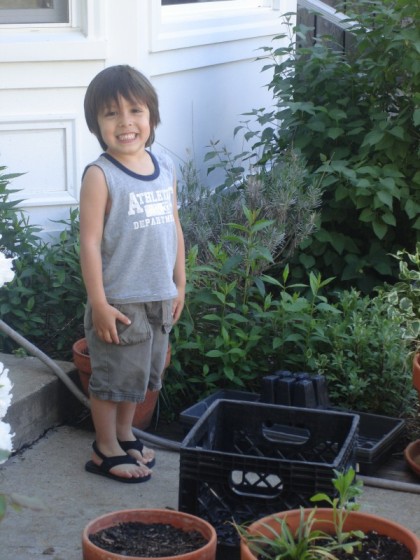 Photo Credit for Koa and the rope