Ready for more birth stories? Here is the last one for now, but hopefully another to soon be written once baby #4 decides to arrive!

Aisling decided she was going to be 10 days! I guess in her mind arriving in January was too cold and not a good idea, so she waiting until February 1! 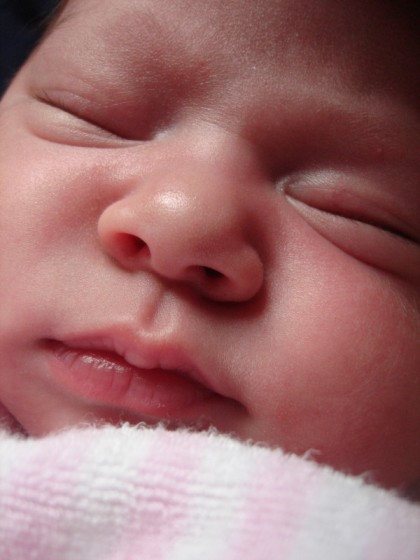 I woke up at 1:30 that morning with some cramping, but nothing strong or really very painful. I laid in bed for another 30-45 minutes to see how far apart they were. Each contraction was about 5 minutes apart, so I called Peggy to give her a heads up just in case it started to get any stronger or progress more. She advised me to call back in about an hour and give her an update. An hour later things were still about the same so I had Brian start filling the pool with hot water and decided to wait a bit longer before I called her. By 3am my contractions were 1 minute long and 1 minute apart and getting stronger. I called Peggy and told her she should probably come before too long. I also called Tyler Black, Brittany DeGroat, Autumn Rae and Amy Floyd to let to let them know a baby should be arriving tonight!

Everyone arrived around 4am and of course the contractions slowed down almost to a stop! Peggy checked me soon after she arrived and I was only 3 cm… a little disappointing! They were 7-10 minutes apart, no longer painful and only about 20 seconds long. It stayed like this for about 45 minutes and I was getting discouraged that I had called all these ladies and woken them up for nothing. Tyler had the idea of trying the steps to see if that would help things to start moving again. I did the steps twice and then went into the restroom and sat on the toilet for a while as well and things started to pick up again! It was a feeling of “YEAH! Things are moving!” and “Oh, No, not labor again, I’m not sure I’m ready for this!”

Tonchi and Koa woke up at about 5:30 so we called Judy Trostle to come and get them. When they woke up Brittany went in to check on them and that just made them more upset because it wasn’t who they were expecting! I sent Brian to check on them and take care one of them and Tyler stepped in, in his absence. She was AMAZING. She knew what to say and do to help me through the contractions. She wasn’t as good as Brian, but I needed her and she was GREAT! Before Judy got there the boys hung out with us downstairs and did a great job. They wanted to see what was going on, but were very good about not getting in the way. Brittany read to them and Amy played with them a bit and they both wanted to keep checking on me to make sure things were ok. By then I was in the pool and not once did they ask to get in with me. I didn’t mind having them there and was able to give them hugs and kisses and chat with them between contractions.

Judy arrived around 6:30 to pick them up. Koa was not very happy about leaving and made his voice known, but Judy didn’t seem to mind. Later on she said he cried a lot on the way home, but was fine during the day and had a great time playing with Tonchi.

By 6:40 labor was really intense and I thought I should be almost done, so I asked Peggy to check me again. She said baby was -1 station and I was 8 cm dilated. I was a little disappointed. I was hoping to be 9 or 10 cm and baby close to being out! 😉 However… 15 minutes later at 6:55 Aisling Michelle was born! It was a SUPER intense 15 minutes. I could actually feel her head moving through my pelvis and it WAS NOT comfortable! As she started to crown I started to push just because I could tell she was right there, but I didn’t have any overwhelming urge to push!

I was SO thankful to be done and SO glad she was here! Brian was REALLY surprised that it was a girl! He had to double check just to make sure! I didn’t tear at all and the bleeding wasn’t too heavy either. She was born in the birthing pool underwater and I also delivered the placenta in the pool as well. Afterwards Brian and I took a shower and I think that is the best shower I’ve ever taken in my life! 😉 The warm water felt great!

After the midwives left I slept for about an hour and then Mom came out to see her before she had to start teaching her classes. Brian and I then had the afternoon to rest and relax and I think Aisling and I slept for about 4 hours! Later that evening we had A LOT more family to visit and see the baby! Mrs. Trostle also brought the boys back in the late afternoon and they were SO excited about their new baby sister! 😉

This was another amazing birth! Just the way I had hoped and with close friends and family there! It was an amazing night. All who attended were each needed in their own special way and I’m so blessed they sacrificed precious sleep to be there to support us! And again, Brian was just what I needed when I needed it most. I love the way each birth has drawn us together and created a stronger bond between us. It’s so good to know he is there when i need him!

We praise God for a safe and healthy baby and for the first girl baby in the family! My mom has 5 grandsons and now a granddaughter! What a treat! 😉 She is going to be tough, but I’m guessing she will be the princess as well!