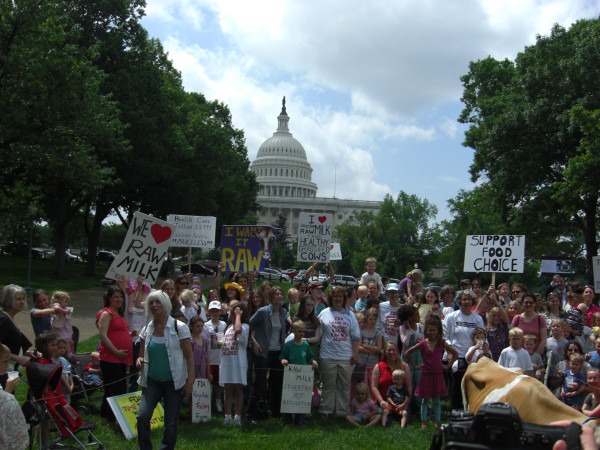 I wouldn’t say that I’m a mover and a shaker or that I’m a big rally goer. I was really debating Sunday evening whether we were going to trek into DC or not. I knew the weather was a little iffy, and I wasn’t sure I had the energy to bring three kidos under 3 ½ via metro into the city for the day with a chance of rain in the forecast. I was pretty close to deciding I was going to stay home when I realized that I often resort to the easy and try to avoid rocking the ship. I often want others to fight my battles for me. I’d rather not be seen as the odd ball out or the one standing in the gap. I felt convicted that if I’m going to complain about what is happening to this farmer, Dan Alger, and I want to continue to purchase my raw milk, then I needed to do something about it. So we went!

It was great experience and I’m glad we could be a part of it. There was a good turnout, probably a few hundred people and we did see a few friends. There were people from all walks of life. We saw ladies with long hair and ankle length skirts, hippies, a few yogis, a few suits and lots of moms. I took a few photos, but nothing that can rival what the news stations were able to capture. At the end of the post I’ve included some of the news coverage of the event.

The organizer or the rally, Liz Reitzig is Mom of 4 with #5 to be born very soon. Sally Fallon was one of the speakers and the author of Nourishing Traditions, as did Jonathan Emord who is a constitutional law attorney for the raw milk movement. I think the best speaker of all was Mark McAfee who is founder and owner of Organic Pastures Dairy in California where raw milk sales are legal as long as it is produced and sold in the state. Raw milk is not allowed to cross CA state lines either to be sold or imported. He was an engaging speaker and had great thoughts and comments.

Morgan the cow came from PA and was milked right in front of the capital! AND her milk was shared with those around! There was plenty of raw milk samples to go around and the cold creamy milk tasted great on the day that was full warmth and sunshine!

Watch the videos below to get a better idea of the happenings of the day!