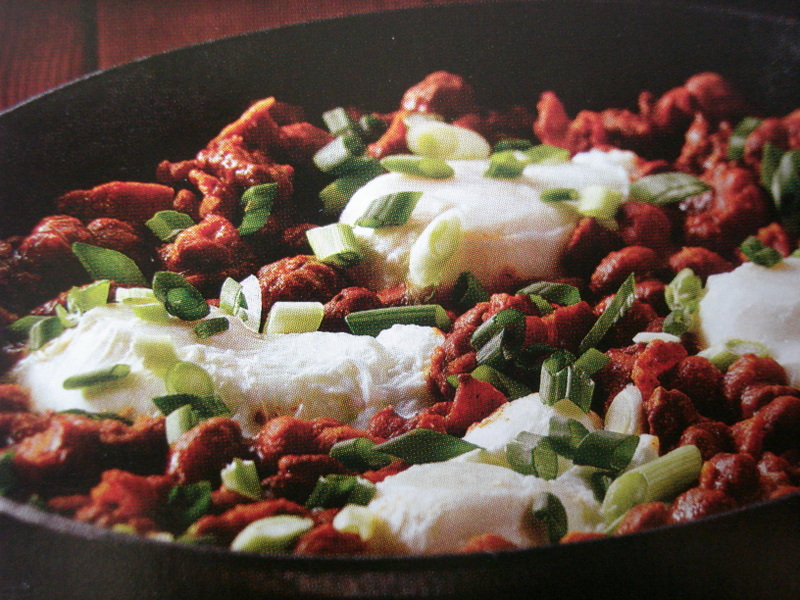 We had a great time with this one! I announced the night before we were going to have a cowboy breakfast and told the boys to come to the table in full dress in case they had to run off to rope a steer before finishing breakfast! They played along! Complete with boots, guns, hats and vests!

This was also a great breakfast for Brian. He often states that 3 eggs isn’t enough to get him through the morning climbing trees until lunch and needs more to hold him. I have a hard time coming up with ideas that could be heartier than eggs. Sometimes we add sausage or bacon to helps, but this recipe was GREAT!

I have included the original version although it isn’t quite on Brian’s diet and has some processed (blah!) foods in it. It is from the [amazon_link id=”0981900321″ target=”_blank” container=”” container_class=”” ]Smart Cooking the Costco Way[/amazon_link] cookbook on page 21. I had some canned baked beans that were given to us that I used, but the second time I did it differently. The 2nd version below is my alterations.

Instructions:
In a large skillet, heat chili over medium heat.
Place bacon on a paper towel; microwave for 30 seconds, or until crisp. Fold bacon into the chili.
Flatten the chili mixture with the back of a spoon. Make 4 indentations in the chili. Break 1 egg into each indentation.
Cover the skillet and cook for 12 minutes, or until the eggs are cooked to taste.
With a large spoon, scoop up 1 egg with a portion of chili and bacon for each serving. Sprinkle with green onions.
Makes 4 servings.

Instructions:
12-24 hours in advance soak/cook beans until soft.
Cook bacon in large skillet or wok. Chop coarsely and set aside.
In a large skillet or wok, heat beans and barbeque sauce over medium heat.
Mix bacon into beans and sauce.
Flatten the bean mixture with the back of a spoon. Make 4 indentations in the beans. Break 1 egg into each indentation.
Cover and cook for 12 minutes, or until the eggs are cooked to taste.
With a large spoon, scoop up 1 egg with a portion of beans and bacon for each serving. Sprinkle with green onions.
Makes 4 servings.

Variations:
Can use left-over meat, chicken, steak, ground beef, ham, etc instead of the bacon
Can also use left-over homemade chili instead of the beans as well.
I do make my own barbeque sauce with fermented ketchup, molasses and a few other things. I’ll provide that recipe another time!

Did you try any variations? I’d love to hear them!